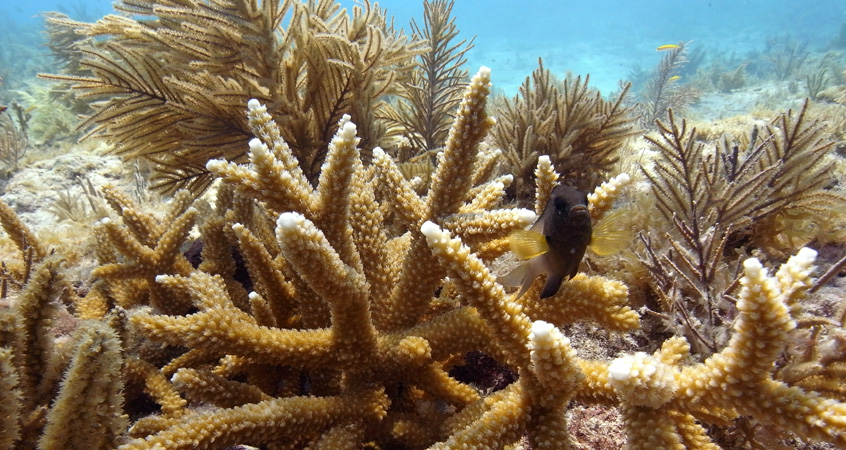 Reef Relief began in 1987 with the installation of reef mooring buoys in Key West. That first step became a system of 116 buoys at 7 reefs that we maintained for 10 years. Led by founder Craig Quirolo, Reef Relief has created coral nurseries to save storm-damaged corals in the Florida Keys and Bahamas. Craig led a 15 year Coral Photo Monitoring Survey of reef health that is currently being loaded onto an online archive at www.reefrelief.org. This survey has led to the discovery of several new coral diseases. Craig has worked with Reef Relief’s Scientific Advisory Board and numerous other researchers to identify the causes of decline at the reef. This past March he was coauthored on a scientific publication that studied the spread of aspergillosis, a common soil-based fungus that has adapted to the saltwater environment and is now attacking Purple Sea Fans.

We have supported the creation of marine protected areas such as the Florida Keys National Marine Sanctuary, the Negril (Jamaica) Marine Park, and established the Key West Marine Park in cooperation with the City of Key West. We’ve helped install buoys and establish programs throughout the Caribbean, including mooring buoys, a coral survey and operation of the volunteer-staffed Captain Roland Roberts House Environmental Center in Green Turtle Cay in the Abaco, Bahamas.

Our Clean Water Campaign has led the effort to identify sewage contamination, agricultural runoff, cruise ships, boats, and other sources of pollution that are affecting water quality at coral reefs in South Florida and around the globe. We have studied the issues, identified solutions, and guided policy development through implementation for a range that includes advanced, nutrient stripping waste treatment for the City of Key West, establishment of a boater No Discharge Zone in the Florida Keys, passage of a phosphate ban for laundry detergents, approval of bans on offshore oil drilling and exploration for South Florida, increased state standards for shallow injection wells, and a host of other actions. Reef Relief has been a watchdog for coral reefs. Today we are working to gain added protection by adding corals to the U.S. Endangered Species List that will hopefully trigger additional protections at the federal level.

Our wonderful board of directors, members, volunteers, interns, sponsors, and foundations have all helped make these achievements possible. We have been fortunate to have accomplished so much with such a small, but dedicated staff, who also deserve our gratitude for years of effort. Thank you all! Together, we will continue to be a major force for coral reefs!

Protected Key West’s coral reefs from the enormous local fleet of charterboats by installing and maintaining 116 mooring buoys at six Key West-area coral reefs for a period of 10 years. This was the largest privately-maintained system in the world and was recently incorporated into the Florida Keys National Marine Sanctuary Reef Mooring Buoy Action Plan.

Spearheaded a campaign to improve water quality in the Florida Keys. Reef Relief was a major supporter of the effort to create the Florida Keys National Marine Sanctuary including the first Water Quality Protection Program of any sanctuary, and has worked to upgrade Florida Keys sewage treatment systems to the highest level of treatment currently available, including drafting legislation to designate Key West‚s waters as a No Discharge Zone for boater sewage, pass a ban for phosphate detergents, and ban offshore oil development in the Keys.

In November of 1991, Reef Relief worked with the Negril Coral Reef Preservation Society (NCRPS) to install 35 reef mooring buoys at the reefs of Negril, Jamaica. In subsequent years, Reef Relief returned to train local preservationists to patrol their reefs with the Reef Ranger Program, maintain the buoys, install a swimmer‚s lane, launch a Junior Ranger school program, and create the Negril Marine Park, managed by NCRPS.

Reef Relief maintains the Environmental Education Center in Key West and educates Florida residents and visitors and others around the world on the benefits and methods of protecting the reef ecosystem. The multi-media campaign includes an extensive website at , brochures, special events such as Reef Awareness Week, the Discover Coral Reefs School Program, signage, documentary films, radio public service announcements and participation in global events.

Since 1987, Reef Relief’s founder Craig Quirolo has monitored the reef growth and health of many coral reefs near Key West on a slide and video format that has led to the discovery of several new diseases. This information is shared with the world‚s leading coral reef scientists, providing them a continuous stream of detailed reef health data that is invaluable in their studies of coral disease and incorporated into Reef Relief educational programs to keep the public informed as to the status of coral reefs. The survey has been expanded to coral reefs in Jamaica, Puerto Rico, Cuba, Mexico, and the Bahamas.

Reef Relief in cooperation with the Guanaja Tourism association, installed 36 reef mooring buoys to protect the fragile coral reefs surrounding the island of Guanaja, a popular dive destination off the coast of Honduras. They survived recent hurricane activity and are available for use to eliminate anchor damage by boats. Educational charts educate divers to the reefs.

In 1998, working in conjunction with Harold Hudson of the Florida Keys National Marine Sanctuary, Reef Relief established a Coral Nursery at Western Sambo Reef in the Lower Keys that salvaged storm damaged corals, secured them to the ocean bottom and elevated them so that they may survive. They were recently used to restore a boat grounding site.

Reef Relief is implementing a coral reef conservation plan in the Bahamas that includes educational programs, reef mooring buoy installations, zoning of marine protected areas with demarcation buoys and implementation of advanced wastewater treatment. Reef Relief has begun a Coral Nursery in the Abacos to salvage storm-damaged corals, especially endangered Acropora palmate that grows only in the Caribbean. They are elevated and secured to the ocean bottom to insure their survival from sedimentation and movement in subsequent storms.

Reef Relief is happy to information share. In 1996, we helped Coralations, a non-profit organization dedicated to preserving Puerto Rico’s coral reefs, get started by helping to organize a workshop in Puerto Rico on coral reef protection. Our educational materials are used (with proper credit going to Reef Relief for their use) as guidelines for their educational materials. We share with Coralations and many other community-based groups, our knowledge about our different activities (environmental education, grassroots organizing, reef mooring buoy programs, etc.), so they can take advantage of what we have done right, and avoid certain pitfalls they are sure to encounter along the way.

On Earth Day, April 22, 1990, President George H.W. Bush singled out Reef Relief as his 123rd “Point of Light,” for its success in turning the Keys’ attitude towards their reef into one of informed stewardship.

Reef Relief efforts have been recognized with numerous local, state and national awards, including the 1996 President’s Council on Sustainable Development, Take Pride in America, Take Pride in Florida, 1994, 1995, 1996 Renew America, 1995 Governor’s Environmental Achievement Award, 1991 Rodale’s Scuba Diving First Environmental Achievement Award, and others from local organizations including the Key West Jaycees, Last Stand, the Chamber of Commerce, and the Key West Hotel Motel Association. Most of all, we have the members, volunteers, and supporters of Reef Relief to thank for our ability to achieve protection for Florida’s coral reefs.