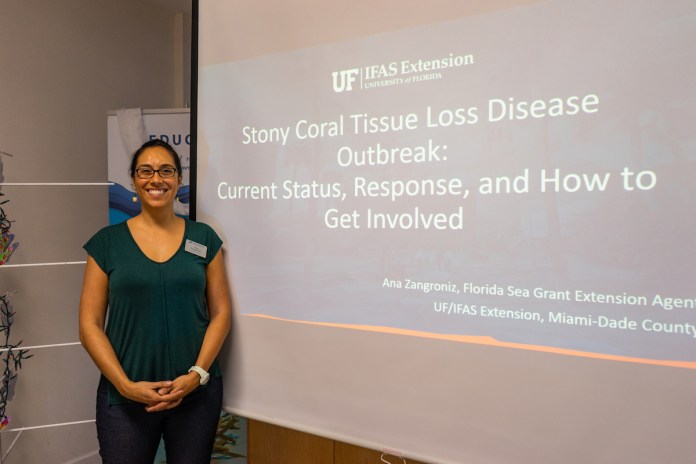 “Ana Zangroniz, Miami-Dade County Extension Agent at UF/IFIS Sea Grant Extension, joined Coral Restoration Foundation for its December “Sips and Science” lecture. The dynamic scientist used humor to discuss what is actually a very serious topic, the stony coral tissue loss disease (SCTLD) currently affecting the Florida Reef Tract. Her talk got into what SCTLD is and some of the response efforts underway.

Zangroniz began by asking people in the room to stand up and indicate how many years they had been diving. The crowd thinned as she asked, “10 years? How about 20 years? How about 30? 40?” The last man standing in the room had been diving for 45 years and the majority of those in the Florida Keys. Her point in all this was to show how many people are familiar with the underwater world, but might not know about the distressing impact SCTLD has had in recent years and how it has changed the local reefs.

Since September 2014, the Florida Reef Tract has been affected by this devastating coral disease. While disease is normal at background levels on any coral reef system, this specific tissue loss disease is much more severe.

Listeners learned that the disease’s naming convention describes the sometimes-quick death that ensues on the stony corals affected by the disease; live coral tissue develops lesions which grow as more tissue sloughs off and dies, said Zangroniz. The pathogen moves across the coral colony, eating away all living tissue and leaving just the dead coral skeleton. This skeleton will eventually be overtaken by algae and sponges, making it uninhabitable for future coral. The scientist shares how this process has turned live reefs into coral graveyards in a matter of months after the disease has passed through.

To the surprise of many in the room, the initial outbreak started outside of Port Miami in 2014 during a dredging project. The disease spread north, riding the Gulf Stream, and south into the Keys. Scientists hypothesize this waterborne pathogen may have spread into the Keys via ballast water, vessels or scuba diving equipment.

Zangroniz shared how the disease has ravaged nearly the entire Florida Reef Tract, with the Dry Tortugas being the only area not yet affected. Contrary to most known coral diseases that thrive in warmer months and only affect a few species, SCTLD persists through all seasons and has affected nearly half of Florida’s stony corals, said Zangroniz. Continuing, she described how these corals, which are the reef-building coral that lay the foundation for the entire reef system, often suffer complete mortality within days to months.

From the audience, someone asked what was on everyone’s mind: what is it and why can’t we stop it?

“I don’t know if we will ever truly know the cause of it,” Zangroniz said. “I think we are five years into a 10-year event.” The disease’s identity still stumps scientists, but they aren’t just sitting by, she assured. Rather, they are using the knowledge that they do have — that the mystery pathogen is water-borne and reacts to antibacterial treatments and firebreaks — to test out various treatment methods.

Many agencies and universities have partnered in response to the disease, said Zangroniz. She described how, of the countless treatment methods tested, the most successful has been a specially formulated amoxicillin designed by experts in coral disease from around the world. This antibacterial paste was tested in a controlled lab before being applied to affected reefs.

Adding trenches or firebreaks to treated areas has also proven effective, she adds. A portion of live tissue is sacrificed to contain the bacteria and treated corals on the lesions. Zangroniz notes that monthly monitoring has shown that this treatment was successful in stopping the disease’s progression.

Zangroniz concludes with a broader view, describing how successful treatment models are being closely watched by Caribbean countries facing their own challenges with man-power and funding for a similar tissue loss disease event.

So, how can we help?

-Practice good diving and boating practices, such as using designated mooring buoys in the Sanctuary instead of dropping anchor on the reefs.

-Decrease the likelihood of spreading the waterborne pathogen by decontaminating dive gear that is porous and stays wet for long periods of time (wetsuits and BCD bladders) in diluted bleaching solutions after diving. Visit the NOAA website for specific time and dilution guidelines: floridakeys.noaa.gov/coral-disease/citizen-participation.html.

-Attend a Stony Coral Observer Training held by Florida Sea Grant to learn how to identify this disease from other conditions and to monitor the progression of the disease and its recovery. Training includes an optional in-water training to identify and monitor the disease real-time. Contact Ana Zangroniz at [email protected] to schedule a Stony Coral Observer Training.

-SCTLD is commonly confused with coral bleaching. Coral bleaching occurs when corals are strained due to stressors in their environment, like extreme temperatures, light or excess nutrients. This causes coral to expel their symbiotic algae (what gives coral its beautiful, vibrant color and the majority of their energy), causing their tissue to turn completely white. The coral is alive but stressed. With SCTLD, the tissue sloughs away and the coral is lost. A dead skeleton void of live tissue is often all that’s left. The main difference between SCTLD and coral bleaching is that corals can recover from bleaching, whereas if they are infected by the tissue loss disease it is fairly certain there is no coming back.”