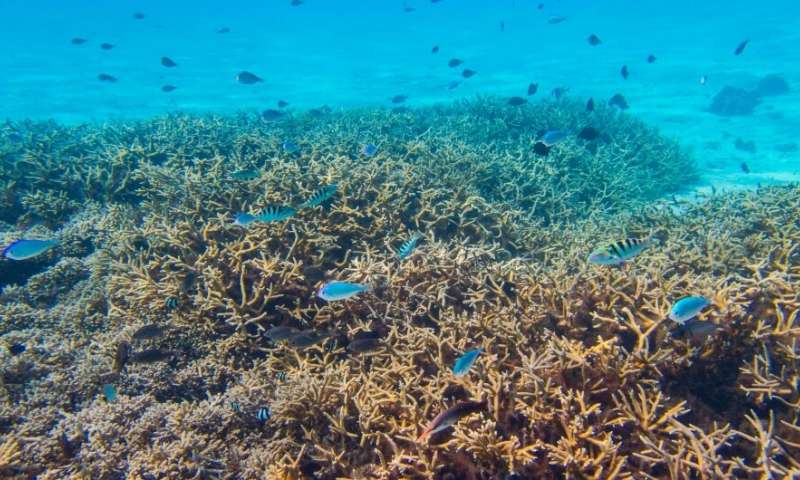 “Coral reefs are not doomed. Although human activities threaten the iconic ecosystems in many different ways, scientists maintain that reefs can continue to thrive with the right assistance.

A study by researchers at UC Santa Barbara details how reducing nutrient pollution can help prevent coral from bleaching during moderate heatwaves. The results, which appear in the journal Proceedings of the National Academy of Sciences, offer new strategies for managing these highly threatened yet important ecosystems.

Reef-building corals host beneficial algae within their tissues. In exchange for protection and nitrogen, the algae provide the coral with sugars. All is well until the water gets too warm.

At higher temperatures, the algae’s photosynthesis goes into overdrive, and the chemical balance between the coral and the algae breaks down. At a certain point, the coral ejects its tenant in a process known as bleaching. Coral can survive for a time without their algae, so recovery is possible if conditions return to normal quickly. But in the absence of its partner the coral will eventually die, and the worse the bleaching is, the more likely that is to happen.

Experiments in the lab, as well as a few small field studies, began to suggest to researchers that nitrogen pollution, such as from fertilizer and sewage runoff, could exacerbate bleaching. Excess nitrogen in the water can short-circuit the beneficial partnership between corals and the algae. However, until now, it was not known if nutrient effects on bleaching occurred in many corals over large areas.

The UC Santa Barbara scientists decided to investigate the effects of nitrogen on coral bleaching—on the scale of an entire island—as part of their long-term ecological research project on the island of Moorea in French Polynesia.

The team surveyed more than 10,000 corals around Moorea during a moderate heatwave in 2016. They studied individual coral colonies in different habitats to capture the variability at a high resolution across the island as a whole. Since nitrogen concentrations naturally fluctuate in seawater, the researchers took samples from Turbinaria ornata, a large alga common on the reefs around Moorea. This provided a record of the nitrogen available to corals in the months leading up to the heatwave.

“These relationships are very complex,” said lead author Mary Donovan, a postdoctoral researcher at the university’s Marine Science Institute. “So, studying them at spatial and temporal scales that match those happening in nature is critical to revealing these really important interactions.”

The team found that high levels of nitrogen pollution lowered the temperature at which coral began to bleach. It also increased the severity of bleaching. “It basically doubles how severe the bleaching is,” said Russ Schmitt, a professor in the Department of Ecology, Evolution, and Marine Biology (EEMB). Coral bleached at extreme temperatures regardless of how much nitrogen was in the system, but even a little excess nitrogen could tip the scale toward severe bleaching under moderate heat conditions.

The scientists looked at the two most common types of branching coral in Moorea. They expected them to respond differently to nutrient pollution, since one is more sensitive to temperature stress than the other. However, both types of corals showed identical responses. This suggested that the strong effect nitrogen pollution has on coral at temperatures normally below levels that trigger bleaching may apply broadly to many coral species.

Climate change has increased the strength and frequency of marine heatwaves, which has increased the severity of bleaching, according to the researchers. Coral reefs are at a tipping point, they explained, so every strategy available to encourage reef health and resilience needs to be explored. “This study shows that it is possible to take some local actions such as reducing nutrient pollution to give reefs a chance, at least in the near term,” said coauthor Sally Holbrook, also a professor in EEMB.

The researchers plan to continue investigating how the effect of nutrient pollution on bleaching translates into coral mortality. The team conducted a similar survey in 2019, a year that saw some of the highest water temperatures on record around the island of Moorea. Their findings should offer a better account of longer-term effects nutrient pollution has on coral reef ecosystems.

“Marine heatwaves and coral bleaching are the defining challenge facing coral reefs in the 21st century,” said coauthor Deron Burkepile, a professor in EEMB. “Managing CO2 emissions requires global action, so as ecologists and conservationists, we’re are also looking for levers we can pull at the local scale to help coral reef ecosystems withstand these global stressors while we also take action to address climate change.”