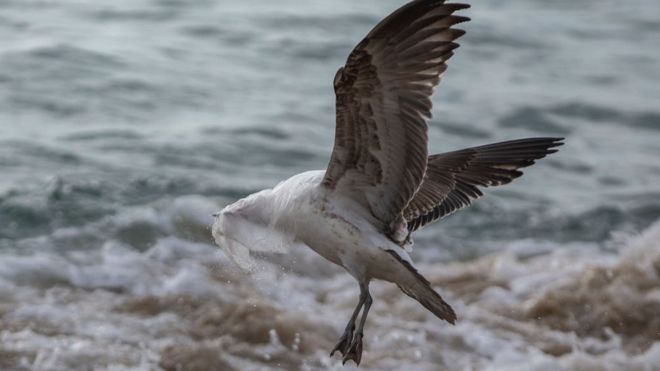 “Plastic pollution can build up in the bodies of seabirds, adding to the threats they face in the wild, according to a new study.

Researchers fed plastic pellets to nesting chicks to look at the direct effects of plastic exposure.

They found chemicals from plastic ended up in the birds’ liver and fatty tissues at levels thousands of times higher than normal.

With nearly half of the world’s seabird species in decline, and 28% classed as globally threatened, chemical pollution is a “pervasive and growing threat”, said the researchers.

The work was led by Shouta Nakayama from Hokkaido University, Japan.

“These findings provide direct evidence of seabird exposure to plastic additives and emphasise the role of marine debris ingestion as a source of chemical pollution,” they wrote in the journal Current Biology.

Given current trends, it is estimated that 99% of seabirds will have ingested plastic waste by 2050.

Birds can mistake plastic floating on the water for food, which can cause injury or death. The effects of toxic chemicals absorbed by the body are less clear.

The next step is to find out whether chemicals in plastic will have detrimental effects on reproduction and survival, said Dr Samantha Patrick of the University of Liverpool, who is not connected with the study.

Studies examining the direct consequences of ingestion are crucial to understand the “hidden” effects of plastics on seabirds, she said.

“This study demonstrates that plastics do lead to raised levels of contaminants in seabird chicks,” she explained. “This is an important step forward in our understanding of how plastics affect marine species.”

The research team looked at streaked shearwater chicks living on a cliff on Awashima Island, Japan.

They then took samples for analysis from wild sea birds living in the Hawaiian Islands, including two types of albatross, the sooty tern, the brown noddy and two species of booby.”